Introduction to the ACE archive 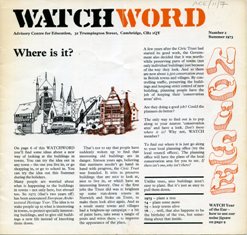 The Advisory Centre for Education was founded in 1960 by Michael Young and Brian Jackson who felt Local Education Authorities (LEAs) did not involve parents enough in the education of their children. They provided a postal advice system, published a magazine WHERE? (based on the magazine Which?), organised conferences on various subjects, forged alliances with other organisations, and established innovative pilot projects. By 1970 membership had reached 23 000.

Over the years, ACE campaigned against corporal punishment, education cuts, school closures, and exclusions; and advocated for an end to secrecy regarding pupil records and greater equal opportunities - particularly racial equality. After the publication of the Warnock Report in 1978, ACE became increasingly interested in the provision of education for those with Special Educational Needs (SEN). Advice for parents on schooling issues was always a key part of ACE’s work. For much of its life this was provided free by phone, in print and later on the internet. It provided training on education law to local authority staff and to advisers in minority ethnic and disadvantaged communities so they could give face-to-face advice locally.

During the 2000s ACE increasingly attracted government funding to support its work. In 2010 the Centre celebrated its 50th birthday.  The Centre closed in 2013.

ACE Education continues much of the same work as The Advisory Centre for Education.

ACE campaigned for the right for parents and pupils to know more about the education system in England and Wales. The collection is a good example of a campaign archive containing newsletters, campaign material, reports, and project files. It also includes all the Centre's minutes, annual reports, accounts, and AGM records providing further background to ACE's planning and organisation.

The online catalogue for the ACE archive.