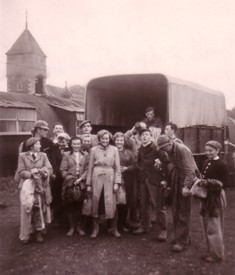 Delegates at a Harvest Camp exchange, 1954

What was German Educational Reconstruction (GER)?

German Educational Reconstruction (GER) was a voluntary organisation founded in London in 1943 with the aim of helping German refugee educationists to prepare for their post-war return to Germany. Their main consideration was the restructuring of the German school system on 'democratic principles'. After the War the emphasis shifted toward promoting Anglo-German relations by acting as an information bureau and means of communication and exchange between British and German educationists. GER undertook a wide variety of activities, including organising conferences, lectures, and study groups; co-operating with other voluntary bodies; arranging visits and youth work; publishing and distributing memoranda, pamphlets and textbooks. It was wound up in 1958.

The GER archive is a large collection relating to all areas of the organisation's work including their conferences, study visits and exchanges. There is a large amount of correspondence and extensive papers regarding the reconstruction of education in Germany after the end of the war. These papers include publications, policy statements, guidance for educationists, research into current and proposed education policies, and reports and diaries written by people in Germany in the immediate aftermath of the war. The archive also contains personal stories of those who returned to Germany. It is one of the most comprehensive resources on educational change in Germany during the post-Nazi period.

Link to the the GER archive catalogue

How to book an appointment to view the collection

For an overview of all our collections on post-war reconstruction see our introduction guide.

The Archives also has a small collection of letters written to Sydney H Wood, one of the founding members of the GER, on his retirement in 1953 (RefNo SHW).