Introduction to the Ronald Wilson archive 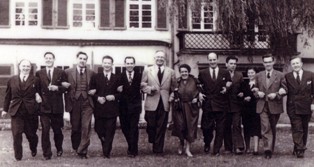 Who was Ronald Wilson?

Ronald Wilson was a prominent educationalist who devoted his life to the advancement of international adult education in the UK and Europe. During the 1930s he travelled Europe widely, including Germany, as part of educational visits. He joined the Army in 1940 and, at the end of the war, was stationed in Germany. On being decommissioned he worked on various education programmes, particularly adult education, in the British Zone of Germany (later West Germany). He returned to the UK in 1957. On his return he worked for a number of organisations relating to the provision of adult education. He was also an active member of the Educational Centres Association (ECA).

Find out how to book an appointment to view this collection