This 2007 short article by David Crook charts, in an exploratory manner, the history of school broadcasting in the United Kingdom, from the early days of radio to the digital curriculum of today.

The BBC Broadcasts for Schools Collection 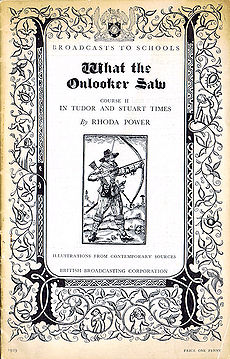 Description  This Collection is the BBC's own collection of pamphlets produced to accompany schools radio broadcasts from September 1926 till the late 1970s; the volumes from Summer 1958 and onwards include pamphlets for television broadcasts as well.

The Collection was deposited on permanent loan with the Institute in 1990.

Searching
There is no listing of the individual items within the bound volumes. Literature on BBC Broadcasts is available in the Library can be accessed via the Library Catalogue.