A guide to the National Union of Women Teachers Archive Collection and the variety of subjects covered in this.

History of the National Union of Women Teachers

Beginnings of the National Union of Women Teachers

The NUWT was founded in 1904 as the Equal Pay League, a pressure group within the National Union of Teachers, and renamed the National Federation of Women Teachers a few years later.  To start with the NFWT’s few officials served in a voluntary capacity, retaining their teaching posts, but by 1917 the increasing work load made this impracticable, and Ethel Froud left her school post to become full time General Secretary (to 1940). 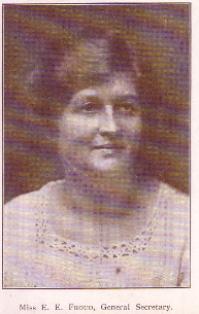 Frustrated by the lack of progress towards securing NUT support for the equal pay campaign, the NFWT took the decision to form an independent union.  The change of name, to the National Union of Women Teachers, was agreed at the 1920 annual conference.  By then the NFWT had set up a committee structure and established various funds to assist members including the Mutual Aid Fund, Provident Sick Fund and Legal Defence Fund.

The 1920s were a period of growth in terms of staff and premises as well as in the number of local branches and county associations.  Services to members were expanded and links formed with other feminist organisations. The range of activities broadened: apart from those connected with the principal aim of securing equal pay and conditions for women teachers, they included a variety of social and cultural events.  They were active in feminist causes notably that of securing full voting rights for women.  Members joined with other organisations in demonstrations and open air meetings.  On these occasions they marched behind their striking green, gold and cream silk banners which bore the slogan “Who would be free herself must strike the blow”.  Social occasions, which often had a fundraising element, included dinners, garden parties and visits to places of interest; there were also opportunities to participate in theatrical productions and concerts.

The most important of the NUWT’s publications was the periodical “Woman Teacher”, 1919 - 1961.  This contained articles on educational issues, discussions of teacher's salaries, equal pay and working conditions, reports of conferences, news of branch activities, and book reviews.  The NUWT also published a variety of pamphlets and booklets on educational and equality issues.  Two histories of the NUWT have been written, Emily Phipps' History of the NUWT (1928) and Muriel Pierotti’s The story of the NUWT (1963). 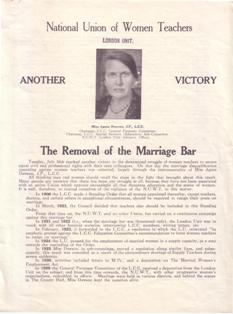 Restrictions on the employment of married women teachers were an issue of major concern.  In London the ban was lifted in 1935, Agnes Dawson (NUWT member) who left teaching on being elected to the LCC in 1925 having played a major part in bringing about the change of policy.  Nationally it was only finally ended by the 1944 Education Act.  Another preoccupation was the tendency towards amalgamating boys’ and girls’ schools, since in the majority of cases it was men who were appointed as Head Teachers of the mixed schools.  Concern for the welfare of pupils was also shown in the campaign to secure provision of entertaining and instructive films made especially for children, and in the assistance given to schools with the cost of school journeys.

From the start the NUWT worked with other women’s organisations on issues of employment, pay and pensions.  These became of increasing importance as cuts to education budgets were made in the early 1920s (the so-called Geddes Axe) and again during the years of economic depression in the following decade, when the savings imposed by government appeared to impact particularly severely on women.  During the 1930s the NUWT became involved in the peace movement, members attending processions and demonstrations in favour of disarmament.  The extent to which it ought to become involved in the peace movement was a cause of disagreement in the Union, some members feeling that it should concentrate on feminist and educational issues. 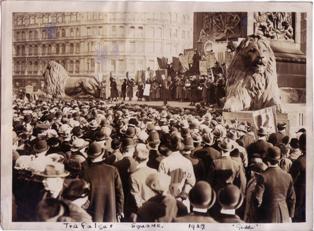 During the war years the evacuation of schools and teachers made maintenance of communication between the Union and its members difficult.  There was concern about the effect on pupils’ education, especially where children from one school were divided among several in the dispersal area.  The Union was also involved in trying to ensure that proper allowances were paid to teachers for travel and billeting expenses.

Throughout the 1940s and 1950s discussions continued and policies were formulated on many topical educational issues including the extension of secondary education to all children, the curriculum at each stage of education, equal educational opportunties for girls, teacher training, and the raising of the school leaving age to 15.  By the mid 1950s the principle of equal pay had finally been accepted by Government, with its introduction phased over seven years to 1961.

Decision to close the union

The future of the Union was considered at a special meeting of the Central Council in December 1959.  Easter 1961, when the final instalment of equal pay was due to be introduced, was decided on as the official date for closure.  A final Victory Luncheon was held on 5th April to celebrate the achievement of equal pay, the aim for which the NUWT and its forerunners had worked so hard for so long.  The occasion was widely reported in the national, provincial and professional press, particular attention being given to the  benefaction to New Hall, Cambridge, where an undergraduate common room is named the 'Froud Room'.

[Research and text by Noreen Nicholson, volunteer - with thanks]