Founded after the Second World War on the progressive ideology of the original Forest School and the Order of Woodcraft Chivalry, Forest School Camps provided summer holiday camps to help children learn about about survival skills and the environment. Each child was treated individually and adults were there to supervise or provide guidance, rather than as authoritative figures. Children learned many skills including cooking and woodwork and were taught "to know the world, to submit to the world and to change the world". They were organised into groups of Elves, Woodlings, Trackers and Pathfinders and subjected to Woodcraft tests and trials. 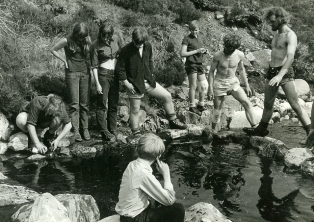 The collection dates from 1917-1997 and provides an insight into the work of the Camps as well as the ideology on which it was based. It includes camp log books, reports, diaries,  photographs, oral histories, and material for children attending the camps including songbooks, dance manuals, and recipes. For further details have a look at the catalogue for this collection.