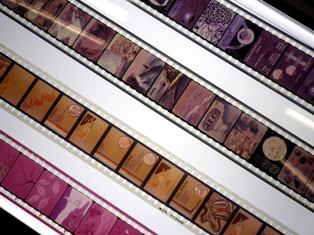 The archives has a number of collections that include teaching resources including filmstrips and transcripts for BBC radio programmes:

Marian Ray (RAY) designed and painted the artwork for educational filmstrips that were used in schools throughout the world. The collection includes all her original artwork and filmstrips used to teach a range of subjects including biology; light, colour and sound; chemistry; physics (including atomic energy); natural history and mathematics. This collection is partially catalogued and available on the online catalogue.

Duncan Taylor (DT) was a producer and programme editor in the Schools Broadcasting Department of the BBC from 1947 to 1972. The collection comprises annotated scripts of programmes transmitted on BBC Radio and BBC Radiovision. A full catalogue for the collection is available on the online catalogue. The library also has the cassettes, visual aids and teaching notes from Radiovision programmes.

We also have the filmstrip collection which was used at King Edward VI school, Birmingham (KNG). The collection includes films created by a range of organisations including the USA War Office, the BBC and Picture Post, as well as students' own recordings.