Guide to the archive of the ILEA Bridging Course designed to provide work-based skills to school leavers.

The Inner London Education Authority (ILEA) Bridging Course began as a pre-pilot scheme in 1976 with one college and two associated schools. The full project ran from 1978 until 1982 and was part funded by the European Economic Community (EEC).

Known officially as the LEA/EEC Transition from School to Work Project the team worked with a number of schools and colleges to provide students with work-based skills including woodwork, cookery, needlework, metalwork, pottery and hairdressing. 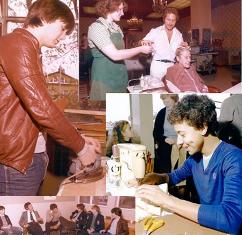 By 1980, the numbers involved had grown to nine secondary schools and five colleges of further education in seven divisions of the ILEA.

The final project report was completed in 1983.

The collection also includes a large number of photographs caputuring the work of the project. In particular these document  the types of skills students were provided with: e.g. woodwork, hairdressing, sewing, cookery and metalwork.

The London Metropolitan Archives owns the copyright for the images in this collection. Please contact them if you wish to use any ask.lma@cityoflondon.gov.uk