Description
Born in 1915, Dr. Ian Michael was appointed the first Vice-Chancellor of the University of Malawi in 1964. In November 1973, Dr. Michael become the Deputy Director of the Institute of Education. Dr. Michael was also the founding member of the Textbook Colloquium (established in 1988), together with Christopher Stray which was established to promote the interdisciplinary study of textbooks, especially from a historical perspective. In 1998, he donated to the Library his collection of books on the teaching of English grammar, together with some associated research materials and papers.

The collection consists of 680 works, dating from the 18th and 19th centuries. In addition to some 370 original texts, there are a number of facsimile editions, microfilms and photocopies.

Searching
This collection is listed on the Library Catalogue.

Michael, Ian. The teaching of English : from the sixteenth century to 1870.
Cambridge : Cambridge University Press, 1987. 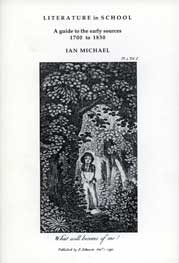